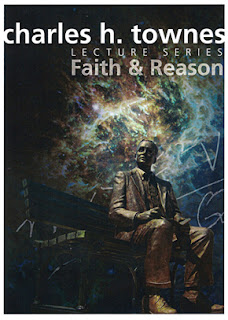 Yesterday, I had the opportunity to hear Marilynne Robinson, author of Housekeeping, Gilead, and Home, speak on Nature and Human Nature for the Charles H. Townes Lecture Series in Faith and Reason at Furman University.

I had read Housekeeping twice, once pretty recently with a book club.  I read Gilead on Saturday, although I'd had it on a shelf at home for a few years.  Every time I would read the description, about a dying minister writing to his young son, I would grimace and put it back on the shelf.  I considered even donating it to a local booksale several times, but I enjoyed Housekeeping so much I thought I'd read it eventually.

It was far better than I expected.  Robinson is very thoughtful, and it comes across so well through her characters.  One thing I appreciated that she said yesterday about the character of John Ames in Gilead is that the minister is a good example of someone who has a very intentional and serious worldview - serious but fallible, because the world does not always bend to our view of it.

She followed that statement by saying she is an avid reader of theology, but does not think she sees any of it as absolute truth.  The majority of her talk was about the daily palate of possibility.  Robinson started out her talk by saying she wanted to "propose a sort of template of existence based on the arbitrary experience of reality."  She dipped into metaphysics, she dipped into Aristotle, she disparaged Richard Dawkins, and then she zeroed in on the exceptional nature of humanity - the "difference," and whether or not that was a reality or not.

Heady stuff.  I think what Robinson was trying to say is that if every human is an anomaly, a coming into being that for all statistical purposes should not have happened, we should be considering the meaning behind that opportunity.  She even said that "the creative side of the anomaly is not the problem.  Ants and lobsters have wars but they will never in a million years go nuclear."  Her conclusion was that because of our exceptional nature, because of the wonder and amazement we should feel for being alive, we should extend our uniquely human privilege to develop our power of thought.  (I gathered that this was an Aristotelian idea filtered through Robinson).

At one point, I turned to a colleague sitting nearby and whispered, "Doesn't it make you wonder if she reads science fiction?"  I think to me, possibility and anomaly and quantum physics are very closely tied to science fiction.  I wanted to hear her apply these concepts in a fictional way.  If reality is experienced so arbitrarily, there is definitely fodder for endless "what if?" stories.   Part of me wanted to stand up and say something like, "What about the singularity?"  I personally think she would enjoy that concept immensely.  I didn't get that far, because as she was signing my book, she told me that she's never really read any science fiction.  "Only science."

Marilynne Robinson seems to win awards for her writing at every turn.  Housekeeping was shortlisted for the Pulitzer Prize, Gilead won the Pulitzer in 2005, and Home won the Orange Prize for Fiction.  I haven't read Home yet, but brought home a copy.  It is a parallel novel to Gilead, telling the story of the Rev. Boughton.  I knew of her fiction, but what surprised me was that she has published two non-fiction books.  Absence of Mind is based on a lecture series she did at Yale in 2009 on religion in the light of science.  I imagine the contents are similar to what we heard at her Nature and Human Nature talk yesterday.  The Death of Adam is a compilation of essays, largely intending to put John Calvin in a new light.  Her devotion to Calvin is not surprising with his focus on the glory of God coming through human nature.